The Virtue of Fortitude

Fortitude enables us to
– face unpleasant duties rather than run away from them.
– Prevents anger, petulance and sadness from controlling us
– Gives strength to bear what must be borne,
– and resist what needs to be resisted.

Recall a time you needed some fortitude.

Mary MacKillop met with several crisis in the years to come—the changing of the rule, the attitudes of both
Bishop Quinn in Bathurst and in Brisbane.

But probably the most subtle of all Mary had to bear was Cardinal Moran insisting on maintaining Mother
Bernard in office as Mother General for so long. She was unsuited to the office, even constituted a danger.
Mary was aware of the damage being caused, but even her obedience and loyalty made it difficult for her to
see what was happening. Several times Mary asked for help when caring for the boys at Surrey Hills and each time was not listened to. When very ill in Melbourne, she wrote asking for money for her prescriptions and new clothing and was ignored. She wrote to her brother Donald, Jesuit Priest, in 1897.

Often when smarting under insults and misrepresentations which I longed to resent, I would have to go and do the “dirty work” as many call it, simply because I could not resist God’s pleading voice or look. Ah, God was good to me. I see it all now more plainly than ever. 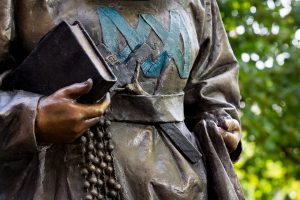 Irene McCormack rsj, was shot with four villagers from the village of Huasahuasi in Peru. All five had stood up for the poor, had worked to provide simple things to improve their lives threatened by the Shining Path Guerrillas. Irene and her companion Sr Dorothy, at one stage left the village with the priests after threats by the soldiers. But Dorothy and Irene felt guilty at deserting the people who had nowhere to go. So they returned. Both showed great fortitude in living in the village, receiving food from Caritas America to distribute to the poor, growing vegetables for the community soup pot, providing educational materials for the children and teaching them to play.

PRAYERS: Creator of the earth and heavens, Lord of the past, present and future:

RESPONSE: BE WITH US THIS DAY

Loving God, you gave us the gift of Fortitude
to enable us to resist what draws us away from you.
Be with us in these days of an unknown future,
of fear of the pandemic, of grief and loss, of struggle and hardship.
We ask St Mary of the Cross to pray with and for us,
that we may have the strength she did, to bear whatever is given to
us, and to do so willingly and cheerfully.
We ask this through Jesus, our brother. Amen

God, my Father,
You love me and forgive me, so TODAY
I accept all as gift –
And ask to find you, Lord, the Giver in the gift.
I choose to face life
Without fear
And to live wholeheartedly
In each present moment.
May my heart sing today
A song of grateful thanks and praise.
I am God’s work of art!
I am precious in his sight.