The Virtue of Charity – Part 2 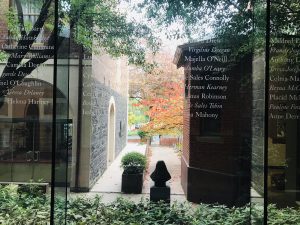 Mary drew friends from all walks of life and different faiths. Mrs Joanna Barr-Smith became a dear friend and paid for the marble top of Mary’s tomb. She and her husband helped the Sisters in many ways.

Dr Benson, a Presbyterian, gave his services to the Sisters free, and a fountain in Kensington attests to his generous care. When he died leaving a  wife and young family, Mary made sure they were cared for. Two Jewish men, Messrs Solomon and Goldstein, generously supported the Sisters and their work.  She had many friends among the titled men and women in Scotland and England. She was also drawn to those seen as criminals. Fagan, a prisoner due for execution, was befriended by her, to the point of requesting to be present when he was hanged. This was refused. Scotch Bella, an alcoholic, the underprivileged, prostitutes, ragged children were all drawn to her, recognising her love and compassion for them as children of God. A story is told of a shopkeeper who had a picture of Mary in his window. When Sisters wanted to buy it, he explained how Mary had helped his family when down and out, to set up his business, explaining he was not a Catholic. He would NEVER sell it!

Am I like Mary willing to help all regardless of faith, culture, age, and circumstances?

Do I welcome newcomers, especially from another culture, to my Church?

Have I in any way helped refugees, asylum seekers and the homeless? If not in a practical way, do I pray for them?

Have I volunteered with a group that works for others—knitting, visiting, serving food etc

Do I know my neighbours?